Bonding between The Divine or Divinity or The Unknown Supreme Entity and The Human Race is as ancient as the evolution of The Mankind.

All over the World, in numerous rituals are performed to appease The Divine, especially after the birth of The New Born. Whispering of Sacred Words in new born’s ears, baptism and many more are well known.

But are we aware that the bonding between the Divine and The Un Born starts in the Womb only !!!!. The link to this bonding is Mother and this phenomenon is known as’ Garbh Sanskar.’ 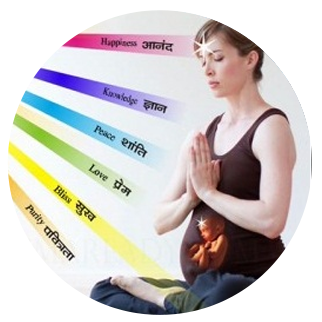 The origin of knowledge and practise of Garbh Sanskar can be traced backed to as far as 400BC which is claimed be the Mahabharata Era. The story of Abhimanyu learning the strategy of breaking into the Chakravyiuh while in the Garbh is well illustrated. Bhakat Prahlad was another example of learning to worship Lord Vishnu in the foetus stage. There are other various vivid examples of this phenomenon of Garbh Sanskar.

For nine months, the developing baby listens to all the outside world sounds. But the strongest bonding of the baby is with its mother’s voice.

Scientific studies have established that from 24 weeks onwards it can hear her heartbeats and her voice and its brain is developed enough to react and absorbs mother’s feeling of Joy, happiness, calmness, sadness, and of course horror too. A restless newborn calms down instantly after hearing mother’s voice and feeling her touch is the result of this bonding.

powerful sound waves are created by chanting and playing music. It creates a powerful trinity of biological bonding between The Divine, The Mother and The Unborn.

Gyatari Mantra-to give confidence and enlightenment, Manojavam Marutatulyavegam- prayer to Lord Hanuman for strength and will power, Saraswati Vandan- a prayer to Maa saraswati for learning and intelligence are few of the suggested chantings. Even if you are not able to chant, just listen to mantras, soothing music and read good books. All this will soothe the baby and prepare you for birthing.

Welcome to Matoshree Multispeciality Hospital, Advanced Affordable Ethical. It gives me immense pleasure to write about our hospital and make efforts to introduce our hospital to all of you. First of all I am thankful to you because of trust and faith you have shown in our hospital.